The students crowded around the table watched with wide-eyed revulsion as EECM staffer Cedrice held up the beaker of thick, viscous, brown liquid. A chorus of “ewww” and “gross” and “sick” could be heard throughout the room.And that was just the reaction he’d hoped for! 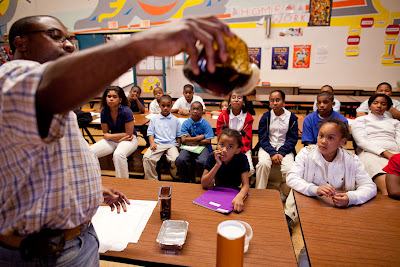 This particular science experiment was designed to demonstrate the terrible impact of cigarettes on your lungs. The activity was part of EECM’s Project Rediscovery program, an ATOD (alcohol, tobacco and other drug) and violence prevention curriculum woven throughout all of our Children & Youth Programs.The target audience for this project was a group of elementary school students, so the demonstration was simple — and graphic. Cedrice created tissue paper lungs, through which he poured first plain water (which symbolized regular air) and then the tar water (which simulated cigarette smoke). The results were plain to see — the tissue paper lungs became clogged and corroded almost immediately by the cigarette water. Yuck!A second piece of the lesson focused on dental impact. Cedrice showed the students a model of a set of healthy human teeth and gums, and then one that showed the impact of smoking. More shouts of “nasty!” ensued. 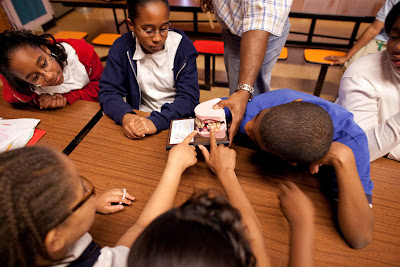 Project Rediscovery is an important part of EECM’s Children & Youth programs. Drug use is all too common in the neighborhoods we serve and the kids in our programs are bombarded by social messages to smoke cigarettes, drink alcohol, and dabble in drugs. Our goal is to educate them from an early age as to the risk of these behaviors, in the hopes of helping build up their resistance and ability to refuse.

And if the looks on the kids’ faces after that particular science project were any indication, we’re on the right track!

About the Author: Shannon Anglero